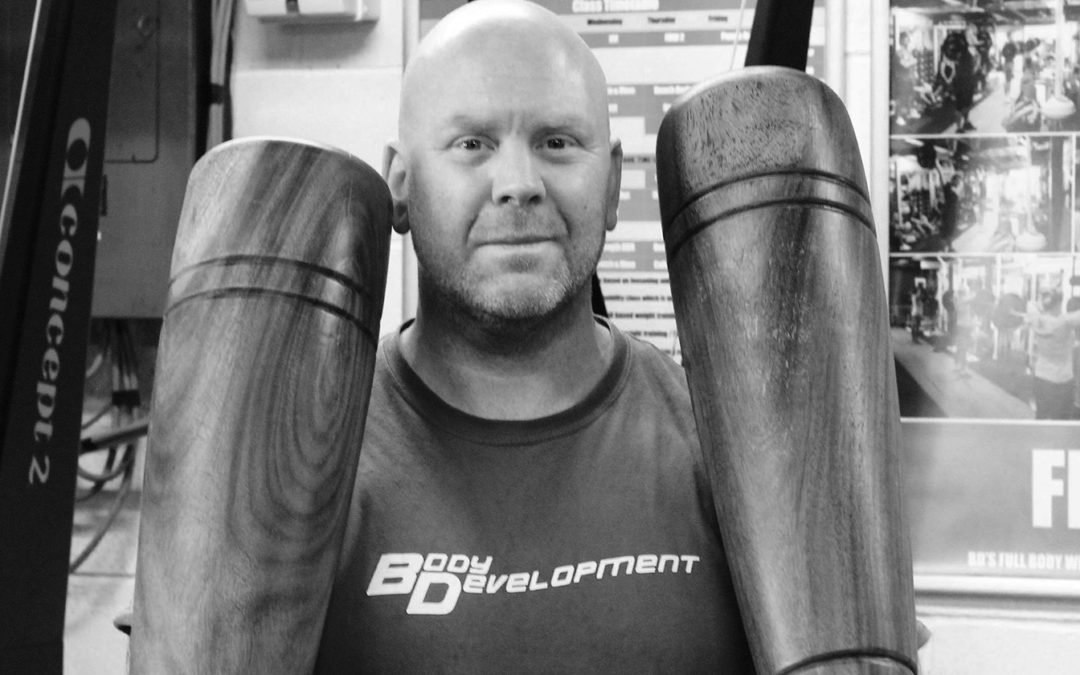 Last week we caught up with Tom Crudgington of the award winning Body Development Gym in Bath for a chat about Persian meels. Tom has been in the fitness industry for nearly 30 years. He is a regular speaker at the annual Birmingham BodyPower exhibition showcasing Meels and Shena. In 2008 Charles Poliquin invited Tom to begin PT mentoring. He has continued mentoring alongside teaching his regular classes with wife Karen at the Body Development gym. On my first visit I was immediately taken by the friendly feel to the place and the support everyone here has for each other during some pretty tough workouts.

BMF: So what were your early experiences with Persian meels?

Tom: In 1997 I first experienced club training with Amir Esmaeli, a world champion wrestler of his day who was trained in the traditional Persian Zurkhaneh ways. I would always turn up half an hour early at his gym in Bristol wanting to learn as much as I could. However, it took 2 years before Amir would allow me to train with the clubs. How different things are these days!

The only clubs Amir had were his 40lb pair! I’ve since had made my own rough copies of Amir’s clubs – around 10kg each club.

I was training 4 to 5 days a week and my main training partners were Albi Breeze and Will Bundy. Will still trains with me to this day.

The first technique Amir shared was a simple cast over the shoulder. He wouldn’t teach any further techniques until I could do 100 reps. It took about a year to get there.

Amir would routinely use the clubs for abdominal conditioning. Most of the people I trained with there were professional boxers, fighters and rugby players.

Amir Esmaeli (3rd from left) then next to him, Tom

BMF: 10kg seems quite a demanding starting weight for even the very strongest of people. What would you now consider a good place to start?

Tom: The way the industry has gone, people are poorly educated and not prepared to operate in the same manner. I can’t see many people going to a gym for 2 years, just to be accepted… and then start the serious training. People these days want an instant download! So these days we have had to adjust. The people who train at Body Development are all a committed group of people. The Persian meels weights they start off with are from 2 to 3kg each club and we build up from there. I have developed a set series of moves over the years to assess where each person is in terms of which size clubs to use.

BMF: From this huge wealth of experience you have gathered over the years, what are the main benefits can you get from meel training alone?

Tom: Persian meels train the whole body. People talk about clubs being good for the shoulders, good for the rotator cuff etc. But when questioned, they don’t really understand the mechanics of he rotator cuff or much else either. The idea of the meel is to train the whole body. It’s so easy these days to see the Zurkhaneh methods online and see the way they are moving… the posting on the leg, how the head movement is integral to it, how the body follows the head, the use of the mechanics. Don’t get wrapped up in awe when you see some guys with huge clubs as some can be hollow or simple made from lighter wood. I have a pair of clubs weighing 15kg each club with thick handles which not many people will ever really be able to swing. If someone is swinging clubs that are 3 to 4kgs each I think they are doing well. But I still like to build people up and expect reps of 100 – be it 10x sets of 10 or 2x sets of 50. This is not necessarily for any real endurance purpose apart from they’re perfecting their ability to transition from foot-to-foot weight displacement etc.

BMF: What is the most common error you see most people make when using meels?

Tom: For the meels it is always going too heavy too quick. It is also it is a lack of understanding around the glutes, the pelvis and drawing back in on yourself. This is the same in all the martial arts pulling back in when doing movement.

BMF: Can you explain what you mean by this?

Tom: You need to understand the mechanics of what you are studying – so you want to look at  movements and the muscles involved in movements, and how the nervous system interacts with the muscles in producing faster movements. I call this MMN – Movement, Muscles, Neurology. The fact is a lot of people don’t take the time to study the movement part, let alone the muscles. I believe that anyone who goes to the gym, not just PT’s, should learn movement. Flexion, extension, lateral rotation, internal rotation etc etc. They should have this knowledge of their own bodies. If they are PTs then they should understand the connections of the muscles within those movements. Advanced PTs should also have a base understanding of neurology. Then if they want to go on and talk to surgeons and other health professionals on a professional basis they should take it a step further again. This is across the board in all exercise, not just clubs.

The big thing is understanding how we produce movement and the club is just an extension. Like yoga or callisthenics, the clubs original purpose was to strengthen the warriors. Now, things have become a bit diluted in the industry. My real passion is to strip it back to basics, to get under the skin of it and find out what its original purpose really was. So when I have people like you who have big experience with clubs, they go “wow” as I peel it back a number of layers as they feel it hands on. This is how I like it to be.

BMF: There is a lot of information you have just shared. Could you strip down the basic foundations practitioners need to be aware of that would help them improve their practice with Persian meels?

Tom: Buy a lighter pair of meels of 2-3kg
Work on the basic foundation moves we work on at Body Development in our kettlebell and meels classes. We have a video of these on the BD Facebook site to take a look at. Or you can see them here on the BMF site.
The drills are:
• Door frame
• Alternating chop
• Block, sweep and chop
• Crucifix drill

BMF: You mentioned the importance of the position of the head in meel swinging. Can you expand on this?

Tom: Position of the head is crucial whether it’s using Persian meels, Indian clubs, mace or similar. It’s all about where you put your head during the movement. I can soon suss out somebody who actually knows how to swing a mace – whether through wrestling, Thai boxing, or whatever else because their head movement will be critical to how they actually develop force.

The best advice I can give is:
• Stay light
• Build a base layer of basic moves.
• The other thing is rest. Don’t start out swinging heavy clubs daily. Start with twice a week and build up from there. It is like anything else… you have to condition yourself. Be prepared to be in it for the long-haul.

BMF: So this is both mental and physical conditioning!

Tom: Yeah! You’ve got to be in it for a year to get the basics. There is so much out the about ‘getting fit in 6 weeks’ or whatever they say. Fuck that! Let’s give ourselves time to adjust and go through the motions and learn about what we are doing.

BMF: A big thank you Tom for sharing a bit of your knowledge. We hope to talk more again soon.

Email me when back in stock Please leave your email address below to receive a notification as soon as this product becomes available again.