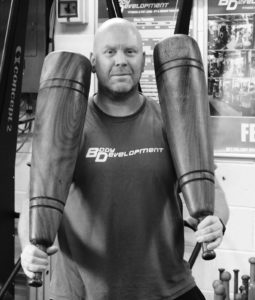 Tom Crudgington, founder of Body Development and one of the UK’s most respected teachers of Indian Clubs & Persian Meels, presents a new club in collaboration with Body Mind Fit: the BD-X Crossover Club.

Bringing together BMF’s passion for equipment innovation, with Body Development’s unparalleled understanding of strength & fitness, we set out to create a new shape that can be used for both Indian club & Persian meel exercises. We caught up with Tom to find out more about his journey into the fitness industry, how clubs and meels became a huge part of his PT & gym workout sessions, and why he wanted to create the BD-X Crossover Club.

“The way I look at strength now, is with an appreciation that strength is only useful if you can connect it to your nervous system and activate it across all the planes of the body.”

Tom, why did you set up Body Development gym?
I started working in gyms when I was about 16. The first gym I worked at was actually a ballet studio – where I ended up teaching martial arts as well as personal training. It was a great training environment so I ran Thai Boxing classes there as well. We had guys go on to fight internationally as well as nationally.

After 11 years at the ballet studio, I moved on to a mainstream Fitness First gym, working hard there for a few years, before leaving with enough money to open my own small studio, a kind of BD version 1.0! It was a tiny little gym a fraction of the size of my current gym, and we focussed on one-to-one training.

We soon needed a bigger space to fit in more equipment, train more athletes, and the opportunity arose to rent this place in Bath, so we went for it! Our primary driving focus is conditioning, so over the past few years we’ve trained a lot of athletes. We’ve had a lot of success – lots of fighters, athletes in sports including tennis & rugby, people going on to compete all the way up to Olympic level.

How have you applied clubs to your training?
Clubs were first developed as a strength-based component for training warriors. I see some great exercises being done, some great turns and flows – but as they gain popularity, I think many people lack an understanding of their original purpose.

One of the most common movements you see practiced all the time is the meel cast. This movement was developed to train warriors for both striking while grabbing an arm and gripping it with elbow to body. Many people are practicing casts but I think it’s important to consider why you are practicing the movement in order to build a practice that includes appropriate movements. Everyone’s doing inner & outer circles, turns and all that wonderful stuff, which is great. And it’s great physical practice, but my approach to applying clubs to training is focussed on the original thought behind the movements, and how to use clubs to train and condition the body for relevant sports.

How often do you teach & practice clubs?
Regularly – we have boot camp classes at the gym where we bring together the clubs, stall bars, Bulgarian bags, and kettlebells.

Why did you want to develop the cross-over club shape?
I got introduced to Zurkhaneh through my old coach Amir Esmaeli. He introduced us to the idea of heavy club training. His key principle when teaching us to train with clubs, was the idea that you were given one exercise and only when you could do 100 reps of it would he show you the next movement. That first exercise took me a year to complete, though it was using a pair of 10kg Persian meel clubs (20kg set).

Now obviously, I can’t train everybody like that. Everybody wants instant downloads and gets bored training in that way these days. So I started to think about what the ideal weight and size would be for beginners in order to practice high numbers of reps safely and build up muscle memory and conditioning. It needed to be a heavy but compact wooden club, which is a cross-over between an SD Kehoe type traditional Indian club, and a small Persian club.

What are the differences between training with the BD-X Crossover Club and a Standard Indian Club?
So in terms of the functionalities – it’s quite a bit heavier. It’s designed more as a compact club for the PT’s that I coach, so that they have something that they can use to learn and teach various movements with.

And then in terms of the name of the club, there is a lot of politics within the world of club swinging at the moment – which I’m not interested in. So I just wanted to go my own route, and come up with something that crossed that border without the label of ‘Persian’ or ‘Indian.’ There’s almost a racist undertone with things going on in the club world, and I think that it’s an awful shame. Clubs should be something that are there for everyone to enjoy & understand.

What does strength mean to you?
Personal physical strength was a necessity to me years ago when I worked on the doors, and when was working with fighters – to essentially have a control factor if ever needed.

The way I look at strength now, is with an appreciation that strength is only useful if you can connect it to your nervous system and activate it across all the planes of the body.

I’ve had some extremely strong individuals in this gym. Many of whom, won’t even attempt to swing a 10kg gada or mace. And that’s because they’re not strong in all the planes. A lot of people are very strong in sagittal plane. They might be strong to a point in frontal plane, but in transverse plane (which involves twisting & rotational movements) most are weak as hell. This overlooked area of movement in the body is why the use of club exercises are so important for achieving strength.

Email me when back in stock Please leave your email address below to receive a notification as soon as this product becomes available again.